Making It Ain't Faking It

When I learned that Amy Poehler and Nick Offerman were teaming up to bring a crafting competition show to NBC, I knew I'd have to watch it. I mean, Parks and Rec is one of my favorite shows of all time, and I love DIY crafts. Match made in heaven, friends. In episode one, Making It has exceeded all my hopes and desires.

The premise: Six contestants are placed in a barn full of crafting supplies with challenges to complete inside a time limit. Every episode has two challenges, and in the end, one contestant gets eliminated, until one winner receives a big shiny cash prize.

It's... pretty standard for a competition show of this nature.

But, where other elimination competitions use screen time highlight tensions between competitors, let the camera dwell extra-long on that eyeroll, and hold confessional interviews where contestants provide commentary on how horrible that other contestant is, Making It gives us Poehler and Offerman with pun-offs. (In Poehler's own words, "Y'all thready for this?")


The episode is packed with gems and heartfelt moments as makers pour their souls into their crafts in a time crunch and our hosts sing their praises. I connected with maker Jemma when she commented on how much time people waste on their phones, and how they could spend that time to make things.

In general, I get a bit rankled when people blame technology for society's woes. This one rang true for me, though. You see, a little over a year ago, I knew I was spending way too much time on puzzle games. For me, they're repetitive, low-demand, but engaging enough that they hold my attention. Playing a puzzle game is meditative and relaxing. I decided I wanted to find something that would allow me to flow into a similar mental space but feel less like I was just wasting time on nothing, and that was why I picked up crochet again. Same feeling of repetition, same low-demand on the mind, but still with unique challenges that make it engaging.

And now, because I spent so much time over the last year doing crochet instead of playing quite as many puzzle games, my teacher desk has buddies: 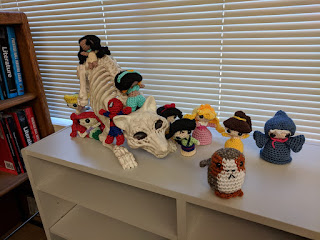 Each maker on the show shares a piece of themselves, not only in what they're making but in the conversations they have with the hosts and the judges. Making things takes time, practice, and dedication to learning from mistakes. The exchange value on that time, though? The joy as each maker shares their creations demonstrates that perfectly.

It's a show made by people who understand DIY is more than Pintrest Fails. I can feel this undercurrent of desire to inspire people to try making something. I agree with Poehler: I wish that instead of eliminating a maker each week, they could bring in a new one.

I look forward to seeing where the competition goes and what crafts and challenges get brought to the worktables.
Posted by Stephanie at 8:19 AM