Reflections on Resolutions: Getting Fit

For New Years, I think it's important to reflect because - for the first time ever! - I actually achieved two of my resolutions. This post will be about the first.

I made working out a part of my life. My husband of ten years has always been into fitness, and I have always decidedly not been, and it's honestly been a point of tension in our marriage. I've dabbled in physical hobbies; I took belly-dancing classes for a while, I did tae kwon do for a while, and on occasion, I'd make a point to go do the treadmill/machines at the gym… for a while. But I've never been able to find a groove. I would go, work out, be sore, take time off to recover, go back, be more sore… and eventually decide it's not worth being sore literally all the time.

My husband and roomies, who've always been fit, took up Crossfit a couple years ago. They loved it. It looked like torture to me: and, in fact, I had good reason to think it was. My roommate would constantly go on about how hard the workouts were - and I had this totally reasonable assumption that if reasonable people are complaining, then it's probably a bad thing. Crazy, right?

She is a masochist, don't get me wrong. But now I see that there was more complexity to it than that. She wasn't saying, "This sucks, and I hate it." She was saying, "I am shaken by how hard I was able to successfully push myself." Shaken, as in amazed and impressed and proud; but also shaken, as in sore and achy.

In May 2019, my husband pulled a total bait-and-switch on me (which is my biggest pet peeve, so you know I was salty): he asked how I would feel about us buying some sessions with a personal trainer at his Crossfit gym (which is called a "box"). I agreed; it wasn't expensive, and he enjoyed it, so why not?

It turned out that these were sessions for me. When we arrived, he peeled off to do some lifting on his own, and I was stuck alone with this coach. Her name was Michelle, and the only way I could describe her is like a fairy: she's beautiful, with golden skin, thick hair, tattoos of flora and fauna, an enigmatic smile, and absolutely miniature. 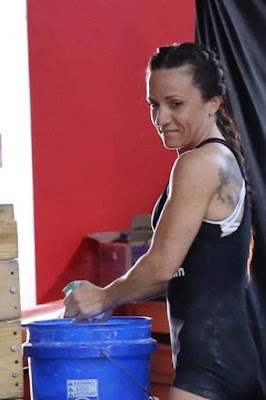 I was completely off-kilter because I hadn't expected to be on my own - and as the session went on, there was a clear disconnect. She thought I knew nothing about how to do this-or-that lift (because my husband had told her as much), but I lived in a house with three Crossfitters. I had done the occasional Saturday-morning workout with them, and I knew a bit. And thus, she had to re-evaluate her plan while I felt condescended to. It wasn't a great first day.

Nor were the second or third sessions very good. I would do my best, but I would become easily frustrated, especially because I knew that every effort was going to result in four or five more days of being sore to the point of immobility. One session, I cried the whole way home out of sheer exhaustion. I wasn't upset; I just felt like an overtired toddler. It was too much.

But Michelle worked with me on skills. She had to re-teach me how to do a squat (I can literally hear her saying "hinge back at the hips!" in my head right now). Before, I was leaning forward and balancing on my toes instead. At the beginning, I could only do it properly if I sat back only a few inches, and that made me feel pathetic. But Michelle wouldn't let that stand - in one session, she gave me a barbell to squat with, which showed me how the more centered form allowed me to bear weight without tipping over. Then, she scaffolded the skill for me: I would hold onto a beam, squat onto a box, and use my arms to pull myself up. When I could do that, she gave me a lower target, a ball.

After our sixth session or so, I had the strangest experience. I got home from the workout, and I had the completely alien impulse to just see if I could do the below-parallel squat we had been practicing, without the ball, without the beam to pull myself up. And what do you know? I did it. My husband was so thrilled that he sent Michelle a video.

It was groundbreaking for me. I had practiced, and I could see it paying off. I had never actually practiced a physical skill like that long enough to get significantly better at it. But also, I had never wanted to. I could have waited for the next week for Michelle to suggest not using the beam and seen then that I could do the squat, but I didn't. This was the turning point.

Once school was out, I signed up for the gym full time. I believed completely that there was a direct correlation between working out and being sore (because that had always been my reality), but that isn't the case. At the beginning, I would work out for one hour a week and be out of commission for four or five days. Now, I can do the same workout and be absolutely fine. If you can push yourself beyond those first six weeks or so, then the pain isn't as bad.

And because I know that, it can be fun! Here are some things I love about it: 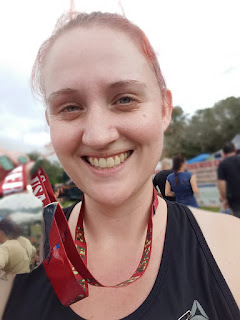 January will be my ninth straight month of working out, which is just surreal. We even ran a 5K obstacle race for Thanksgiving! I am so grateful to my coach and my family for supporting me and being patient, patient, patient. I hope that anyone reading this who wants to resolve to get fit, stick it out past the first six weeks or so. It will get better. Get a community of people who will support, understand, and yet push you. And if you have access, seriously, try Crossfit. It's a cult, which I will explore in a later post, but it's a lot safer, more inclusive, and more fun than you'd expect.

Email ThisBlogThis!Share to TwitterShare to FacebookShare to Pinterest
Labels: Rachel


I've done it before. I'll probably do it again. But I lost track of whatever old blog has my thoughts and process, and I want to get back into a habit of blogging this year, so here we go.

In my process, I use paper edits for late-stage editing. Essentially, I feel pretty confident the beats of the story are all in the right places, I've cut frivolous scenes, filled in major plot holes. I've gone cross-eyed reading the story digitally a dozen times over, and it's time for a change in scenery. Often, this happens around the same time when I recruit beta readers.

I take the manuscript to an office supply store to get it printed and spiral bound because the cost of a spiral-bound print is pretty much equivalent to the cost of ink, paper, binder, and time if I printed it at home. Double-spaced, page numbers at the bottom, double-sided. The double-spacing gives me room to write notes. I also number each scene individually, and I have a spreadsheet with a full scene outline I create while drafting. Even if the page numbers differ between the print and digital copies, I can use scene numbers to orient my changes.

Now that I've got the manuscript printed, spiral-bound, in hand, I start by reading it without a pen. When I worked in my college writing center, during the first part of any writing session, we asked the writer to read their paper out loud once--at least one page of it, depending on how long it was--so that writer and writing consultant could both get a sense of what was there. It seems time-consuming and pointless, but hear me out here:

If I had a pen, I'd get too quickly caught up in what's wrong and making fixes at a sentence level, and I'd miss this opportunity to absorb the whole manuscript exactly as it is. The changes I made at sentence level might be completely pointless. If I added a description of a character, read two sentences further, and found a similar description already there, that would also be a waste of time. Reading first gives you perspective.

Plus reading without a pen lets me find the small joys of the manuscript more easily. I file away the moments when I cringe because there's an inconsistency or a typo. I focus as I read on what's good and essential to the story. How do the characters' big picture arcs develop? Where are the best moments? The most satisfying descriptions?

When revision and editing is all about what's wrong, it gets rough fast. When revision and editing is about taking the good and making it better, it becomes a process of growth. It's a small difference, but it helps me. Sure, I still sometimes have to "kill my darlings"--those delectable but totally useless descriptions that clutter things up, but it feels more like trimming back a decorative hedge and less like setting fire to a forest.

After I finish my penless read-through, I choose around five things to focus on and mark up--One for each of the five colors of little plastic sticky tabs I buy. Two colors at this point are static:
The other three (blue, green, and pink) might be about character relationships or places to foreshadow a plot point--big picture things that need to be smoothed out over the course of the whole manuscript.

With this particular manuscript, my world bible for this setting and story is an absolute mess, scattered across multiple Google Drive files, a OneNote file, and some paper notebooks. I've now got a World Anvil account, so while I'm doing my second read-through and marking things up, I'll also add notes to World Anvil about worldbuilding, characters, and timelines to ensure consistency and unify all my notes.

Once I have my paper edit notes, I'll take them and apply them to the digital version. Then it'll be digital proofreading and time to query!

It's a lot of work start to finish, but the last time I did paper edits like this, I produced a manuscript that got two full requests from agents, so I know I'm not just spinning my wheels in the mud.

What are some of your favorite revision strategies? Let's help each other out and share in the comments!
Posted by Stephanie at 12:24 PM No comments: